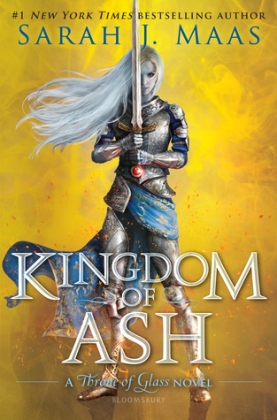 This review will be spoiler free but I will assume you have read all previous books.

God, this book. Kingdom of Ash definitely lived up to it’s reputation that’s for sure. I decided to take my time with this book and really savor it. So much that it took me all of November to read it, oops! I will be honest, I was a little hesitant going into this book because Maas’ finale for her other series, A Court of Wings and Ruin let me down. I felt that the plot was too rushed and that while things did happen, nothing major happened. I firmly believe that the Throne of Glass series is her strongest work out of the two, and always recommend it over ACOTAR.

In theory I should have re-read Queen of Shadows and Empire of Storms before I read Kingdom of Ash, but I didn’t.   *facepalm*    When I first started reading this book I had to look up characters names and bios because I had forgotten who they were and why they were important. Maybe if I had re-read Queen of Shadows and Empire of Storms the first few chapters wouldn’t have gone so slow for me. Because, heads up, the first 100 pages or so are slow. We are reunited with all of the characters from previous books plus characters we met in Tower of Dawn. However, it does move fairly quickly as each chapter is from a different point of view. During this stage it was easy for me to put down and pick up after a day or two, which I did a few times. (probably explains why it took me all of November to read this 😉 )

Parts of Kingdom of Ash didn’t feel like a finale book, but rather the book before the finale where everything builds up. I’m not sure if it was because Maas’ didn’t really give us a pre-finale book but instead Tower of Dawn, or if it was just the sheer size of the book. 992 pages is a lot for a finale book of any kind. HOWEVER, the last 200 pages are amazing and make up for a lot for the parts that seem to drag on.

What I’ve loved throughout the Throne of Glass series is how strong and amazingly written Maas’ female characters are. They seem to be really the focal point of her series, and she does not disappoint in Kingdom of Ash.

Aelin of course will always be my favorite, hands down. But in my opinion, it almost felt like she took a back seat for most of this book until the very end — which I was okay with actually.  After having finish the book I understand why Maas chose to do that and it works for me. The bulk of the book seemed to focus more on Aedion, Lysandra and Manon, and what they were going through. I loved Manon’s journey through this book. She grew and developed in so many ways, and I got more teary eyed reading her parts than I thought I would. And to believe I didn’t really like her when she was first introduced into the series.  Aedion and Lysandra’s chapters felt kind of repetitive to me, but I understand why. Just kind of bummed that they were.

I really enjoyed Dorian’s chapters a LOT. I forgot how much I liked him as a character. His sass and mischievousness were back and better than ever. I did think there were aspects of his magic that weren’t really explained thoroughly and it kind of bummed me out. I wish those areas would have been polished and explained a bit more. But maybe they were explained in Empire of Storms, and I just forgot because I forgot to do a damn re-read.

Because there were so many POV’s I felt the characters we grew to love in Tower of Dawn took a backseat in this. I wanted more chapters between Nesyrn and Sartaq, and more of Borte. I also….sigh….was not a fan of Yrene’s story for most of this book, and I’m SO bummed. Yrene was my favorite in Tower of Dawn and I just did not like how her story was going. That is until the very end. You win Maas, you win.

Also, unpopular opinion (maybe) but Maeve by far is my favorite villain. I thoroughly enjoyed reading her parts and interactions between everyone. She is just so smart and cunning. I honestly would love to read a prequel series about Maeve and the three brothers.

I loved how full circle Kingdom of Ash came. Without giving too much away just know that there’s a point in the book where a group of the characters return to a significant location and it makes your heart hurt that much more. It’s brilliantly written and executed with perfect symbolism.

I’m so glad I decided to read this book at home on my couch rather than finish it at work or in a cafe because I was a blubbering mess by the end of it.  The ending was so perfect and exactly what I wanted and expected things would end. To me, it wasn’t the typical predictable ending. Yes, people live and people die, and the people who lived are not all that happy. They have seen real loss and then have to completely rebuild from the ground up. It felt very real to me and very raw.

I’m still going over the events of the book and still feel like I’m a bit hungover from it. I was debating on whether or not to give this book four or five stars, but the last 200 pages made my decision for me: five stars, easily. I do think it could have been a bit shorter in length to help with the bit more slow bits, but overall such a terrific read.

I am going to miss these characters so much. I do hope Maas will maybe write a spin off series like she is with her ACOTAR series because I think we need it. I’m supposed to be starting Cassandra Clare’s finale book, but don’t know if I can handle that just yet, but we’ll see. I can only have my heartbroken so many times in a row 😉

If you are currently reading Kingdom of Ash I hope you enjoy it! If you’ve finished it already, let me know what you thought — I’d love to hear.

PNW | bookworm | cat mom | tea enthusiast | I'm an avid reader slowly catching up on my very long to-read list. I love to read all genres, but I mainly gravitate towards fantasy, mystery, or true-crime. When I'm not reading I spend my time catching up on podcasts, tv shows, or wandering around the many bookstores in Seattle with a cup of tea in hand. View all posts by Kacey 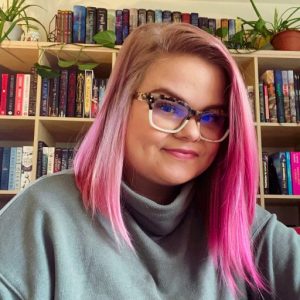 I’m Kacey, the person behind Tales of a Bibliophile. I’m an avid reader, cat mom, tea lover, and call the PNW home.

Friend me on Goodreads!